Viewtiful Joe is a Japanese anime series based on the video game series of the same name. The series follows a similar plot of the games, but there are many differences. The series, comprising fifty-one episodes, but only the first twenty-six episodes aired in the United States.

Following the games' storyline, movie lover Joe and his girlfriend Silvia enjoy a seemingly normal trip to the movies to see an action flick starring Joe's idol, Captain Blue, when suddenly the leader of the evil Jadow force reaches out of the screen and takes Silvia into the movie. Joe is forced to follow her by Captain Blue's mecha, Six Majin (renamed "Robo Six" in the English anime, and "Six Machine" in the Spanish dub), and meets Captain Blue in the flesh who grants Joe the power to become an action movie hero in his own right called Viewtiful Joe. 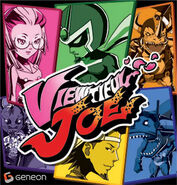 Scan of the back of a Viewtiful Joe Action Figure box

Community content is available under CC-BY-SA unless otherwise noted.