Viewtiful Joe is the red-clad Superhero version of Joe, an average movie lover whose world was turned upside-down when he found himself brought into the World of Movies.

Joe was just an average movie lover, and an especially big fan of Tokusatsu movies starring his icon, Captain Blue. He would always head to an old movie theater, which was run by his father, Jet Black, to watch Captain Blue movies. One day, he was there on a date with his girlfriend, Silvia, watching a Captain Blue movie, when suddenly, the villain reached out of the movie and kidnapped Silvia! As Joe watched, the hero mecha, Six Majin, was also knocked out of the movie, and brought Joe in with it!

Inside the movie, Joe is given a V-Watch by Captain Blue and sets out to save both Silvia and Movieland!

In the original Viewtiful Joe Game, Joe is just a movie fanatic that idolizes Captain Blue, his favorite movie character. One day while watching a movie with his girlfriend, Silvia, a shadowy figure defeats Captain Blue and reaches from the screen to pull Sylvia into it. Captain Blue's robot, Six Machine, is punched out of the movie by the figure, and it takes Joe back with it. Joe is confronted by Captain Blue, who gives him a V-Watch. This allows him to transform into his alter ego, Viewtiful Joe, whenever Joe says the word "henshin" (which he expands on by adding "a-go-go baby!" to the end).

Joe obtains his name from his rival, Alastor, after he exclaims "Viewtiful!" at the sight of Joe's fighting skills.

Viewtiful Joe is the main character in the series. His goal in the first Viewtiful Joe game is to save his girlfriend Silvia. In the second game, he and Silvia are the protagonists of the story and they fight Gedow's army.

"The hero has arrived." —Joe

In his first vs. Capcom fighter debut in Tatsunoko vs. Capcom, Viewtiful Joe is an outstanding offensive rushdown character, he also has a very small hit box which allows him to avoid some attacks that the bigger fighters cannot. Joe's primary drawback is that his moves do not have much range and thus like in TvC, Advancing Guards are one of his main weaknesses. He has slightly below average stamina and weak attack, but his outstanding aerial moves, quick movement speed and excellent projectile have made him a solid character. Sadly, Joe's moves are not as good on ground as they are in the air. Also, his Excellent Knuckle Punch command normal is a rather quick overhead, enabling Joe to pull off nasty mixups.

He had a weak defensive game in Tatsunoko vs. Capcom, but in Marvel vs. Capcom 3, he's much improved in this area (though at the cost of his original Slow and Zoom Level 3 Hyper) as his Voomerang has been buffed to great measures for a great keep away game, as well as being able to zone his away into his opponent's field offensively. Also as of the UA-S version of TvC and in virtue of MVC3 as well, his Mach Speed can now be jump cancelled at the final strike like Chun-Li's Houyokusen and Dante's Prop Shredder, giving him powerful air combo setups. To top off, Joe can now even triple jump and double air dash, giving him more mobility options and even more air combo/aerial rave potential. Though his Red Hot Kick no longer can go forward, limiting his air options carried from TvC, but it can now be cancelled into Hypers, and speaking of Hypers, his Desperado is now a more practical Hyper combo than in the last game. His new Groovy Uppercut is also hard to punish since he can re-perfom any of his air actions while falling from it.

Unlike in TvC, Joe's main air combo finisher is the same, only re-allocated to his j.S while he gains a new jumping H (The opposite happens to Zero, and then Frank in the Ultimate version). His j.S is also a great approach tool due to multiple hits.

In UMVC3, Joe's j.S has more priority and is an even more powerful aerial, and his hitbox decreases when jumping, making him more harder to air combo. His Shocking Pink on the downside and upside alike can no longer be juggled around the screen, making it a bit more safe but somewhat impractical. His ground throw range has also increased, compensating for his attack range. His new V-Dodge move can be great for instant evasion equivalent to the KOF-style sidestep, in that it is cancellable, making Joe's punishing game more prevailent. His midair Desperado can also now OTG.

Changes in Ultimate Marvel vs. Capcom 3[] 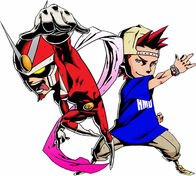 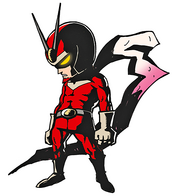 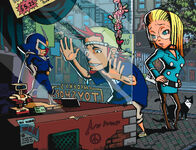 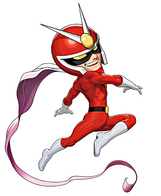 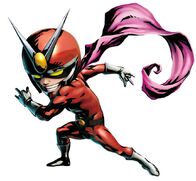 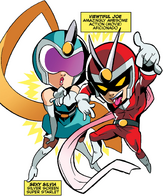 Viewtiful Joe's theme is a remix version of Joe The Hero from the original Viewtiful Joe.

Community content is available under CC-BY-SA unless otherwise noted.
Advertisement