Gadget Cop is a good cop gone bad when his hero-ness is taken from him. The ammunition from his double 9's must be used against him to be defeated.

This boss has a variety of ways to hit him. His main attacks from both of his guns can be deflected with Slow punches or kicks. Punch the first bullet and it will ricochet and defect the others. As he opens his midsection to do a missile attack, you can easily switch the screen with Slide and Touch him to instantly cancel the attack and stun him in the process. Run up and attack him while he is stunned from the Touch. The missiles from his midsection can be deflected like his bullets with a Slow punch or kick as well. When he does his dive bomb attack, watch the top screen to see where he is and avoid it by running underneath him.

You can use Split at anytime during the battle to flood the area with sewage water by moving the pipes in the background and stun him for a pretty good bit of time, allowing you to get some major damage in on him. Don't get to VFX happy in this battle and you will be able to take him down rather quickly with his many weaknesses. Be sure to deactivate Slide and Split after they have served their purpose or your VFX gauge will drain quickly. 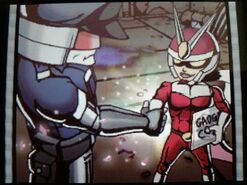 Add a photo to this gallery

Retrieved from "https://viewtifuljoe.fandom.com/wiki/Gadget_Cop?oldid=5362"
Community content is available under CC-BY-SA unless otherwise noted.